Downtown Eau Claire has attracted a lot of attention in recent years. The North Barstow Redevelopment District began in 2002 and resulted in Phoenix Park, which has won many awards for creative design and community building. Today, Phoenix Park is a popular place for the community to gather for concerts, weddings, along with the nearby Farmer's Market Pavilion which attracts thousands of people for the locally grown fruits, vegetables, flowers, and other goods.

Next to Phoenix Park, several new mixed-use buildings have been developed, forming a truly urban neighborhood. Ground broke for the Riverfront Terrace Apartments in November 2011, and both buildings were ready for occupancy in early 2013.

Across the Chippewa river another Redevelopment District is forming, the Cannery District. The Eau Claire Redevelopment Authority is hoping to convert an industrial section of the riverfront into a pedestrian-friendly area with access to the river, new hotels, and other businesses that would benefit from the proximity to downtown and Mayo Clinic Health Systems.

The Eau Claire Redevelopment Authority is a group of members who are appointed by City Council. Their purpose includes carrying out blight elimination, slum clearance, and urban renewal programs and projects. 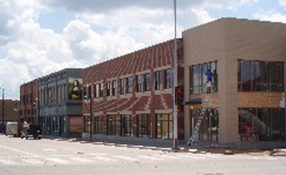